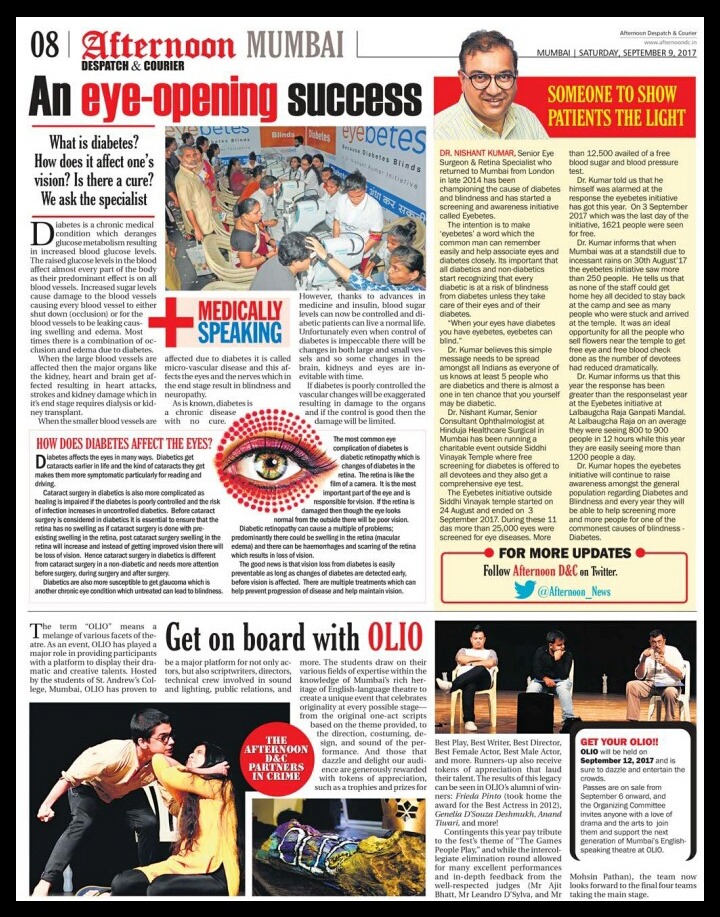 What is diabetes? How does it affect one’s vision? Is there a cure? We ask the specialist

Diabetes is a chronic medical condition which deranges glucose metabolism resulting in increased blood glucose levels. The raised glucose levels in the blood affect almost every part of the body as their predominant effect is on all blood vessels. Increased sugar levels cause damage to the blood vessels causing every blood vessel to either shut down (occlusion) or for the blood vessels to be leaking causing swelling and edema. Most times there is a combination of occlusion and edema due to diabetes.

When the large blood vessels are affected then the major organs like the kidney, heart and brain get affected resulting in heart attacks, strokes and kidney damage which in it’s end stage requires dialysis or kidney transplant.

When the smaller blood vessels are affected due to diabetes it is called micro-vascular disease and this affects the eyes and the nerves which in the end stage result in blindness and neuropathy.

As is known, diabetes is a chronic disease with no cure. However, thanks to advances in medicine and insulin, blood sugar levels can now be controlled and diabetic patients can live a normal life. Unfortunately even when control of diabetes is impeccable there will be changes in both large and small vessels and so some changes in the brain, kidneys and eyes are inevitable with time.

If diabetes is poorly controlled the vascular changes will be exaggerated resulting in damage to the organs and if the control is good then the damage will be limited.

How does diabetes affect the eyes?

Diabetes affects the eyes in many ways. Diabetics get cataracts earlier in life and the kind of cataracts they get makes them more symptomatic particularly for reading and driving.

Diabetics are also more susceptible to get glaucoma which is another chronic eye condition which untreated can lead to blindness.

The most common eye complication of diabetes is diabetic retinopathy which is changes of diabetes in the retina. The retina is like the film of a camera. It is the most important part of the eye and is responsible for vision. If the retina is damaged then though the eye looks normal from the outside there will be poor vision.

Diabetic retinopathy can cause a multiple of problems; predominantly there could be swelling in the retina (macular edema) and there can be haemorrhages and scarring of the retina which results in loss of vision.

The good news is that vision loss from diabetes is easily preventable as long as changes of diabetes are detected early, before vision is affected. There are multiple treatments which can help prevent progression of disease and help maintain vision.

Someone to show patients the light

Dr. Nishant Kumar, Senior Eye Surgeon & Retina Specialist who returned to Mumbai from London in late 2014 has been championing the cause of diabetes and blindness and has started a screening and awareness initiative called Eyebetes.

The intention is to make ‘eyebetes’ a word which the common man can remember easily and help associate eyes and diabetes closely. Its important that all diabetics and non-diabetics start recognizing that every diabetic is at a risk of blindness from diabetes unless they take care of their eyes and of their diabetes.

“When your eyes have diabetes you have eyebetes, eyebetes can blind.”

Dr. Kumar believes this simple message needs to be spread amongst all Indians as everyone of us knows at least 5 people who are diabetics and there is almost a one in ten chance that you yourself may be diabetic.

Dr. Nishant Kumar, Senior Consultant Ophthalmologist at Hinduja Healthcare Surgical in Mumbai has been running a charitable event outside Siddhi Vinayak Temple where free screening for diabetes is offered to all devotees and they also get a comprehensive eye test.

The Eyebetes initiative outside Siddhi Vinayak temple started on 24 August and ended on 3 September 2017. During these 11 das more than 25,000 eyes were screened for eye diseases. More than 12,500 availed of a free blood sugar and blood pressure test.

Dr. Kumar told us that he himself was alarmed at the response the eyebetes initiative has got this year. On 3 September 2017 which was the last day of the initiative, 1621 people were seen for free.

Dr. Kumar informs that when Mumbai was at a standstill due to incessant rains on 30th August’17 the eyebetes initiative saw more than 250 people. He tells us that as none of the staff could get home hey all decided to stay back at the camp and see as many people who were stuck and arrived at the temple. It was an ideal opportunity for all the people who sell flowers near the temple to get free eye and free blood check done as the number of devotees had reduced dramatically.

Dr. Kumar hopes the eyebetes initiative will continue to raise awareness amongst the general population regarding Diabetes and Blindness and every year they will be able to help screening more and more people for one of the commonest causes of blindness – Diabetes.