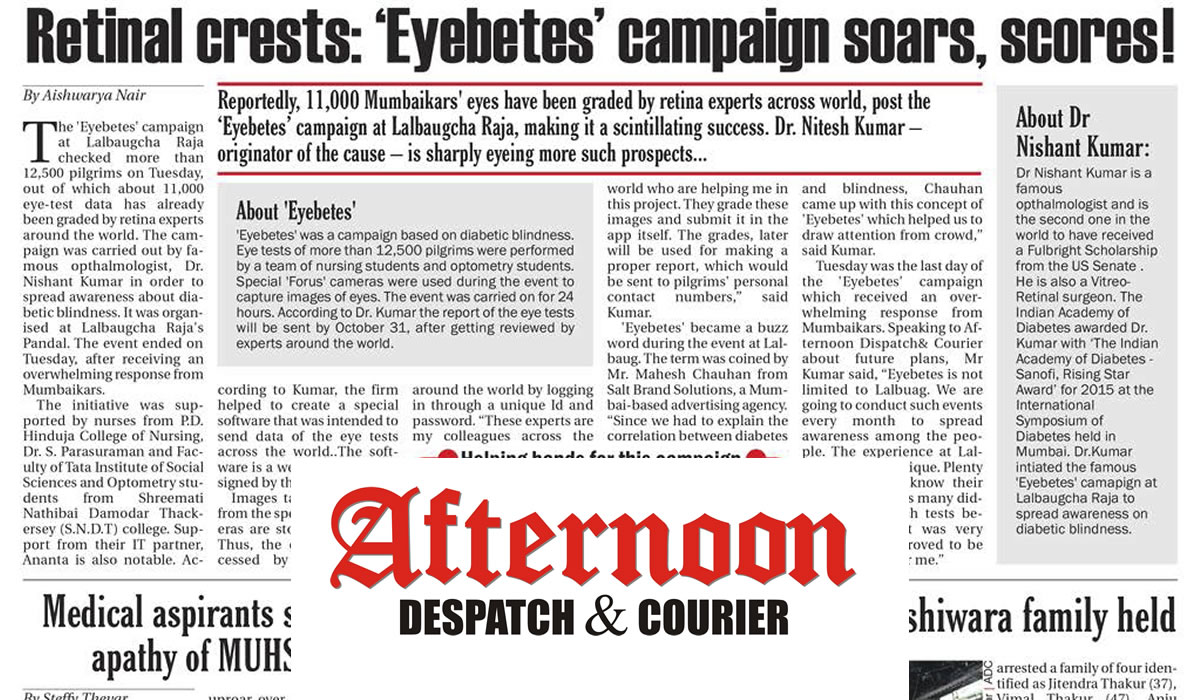 Reportedly, 11,000 Mumbaikars’ eyes have been graded by retina experts across world, post the ‘Eyebetes’ campaign at Lalbaugcha Raja, making it a scintillating success. Dr. Nishant Kumar – originator of the cause – is sharply eyeing more such prospects…

The ‘Eyebetes’ campaign at Lalbaugcha Raja checked more than 12,500 pilgrims on Tuesday, out of which about 11,000 eye-test data has already been graded by retina experts around the world. The campaign was carried out by famous ophthalmologist, Dr. Nishant Kumar in order to spread awareness about diabetic blindness. It was organised at Lalbaugcha Raja’s Pandal. The event ended on Tuesday, after receiving an overwhelming response from Mumbaikars.

The initiative was supported by nurses from P.D. Hinduja College of Nursing, Dr. S. Parasuraman and Faculty of Tata Institute of Social Sciences and Optometry students from Shreemati Nathibai Damodar Thackersey (S.N.D.T) college. Support from their IT partner, Ananta is also notable. According to Kumar, the firm helped to create a special software that was intended to send data of the eye tests across the world..The software is a web-based app designed by the Ananta team.

Images taken of the eyes from the special ‘Forus’ cameras are stored in this app. Thus, the data can be accessed by retina experts around the world by logging in through a unique Id and password. “These experts are my colleagues across the world who are helping me in this project. They grade these images and submit it in the app itself. The grades, later will be used for making a proper report, which would be sent to pilgrims’ personal contact numbers,” said Kumar. 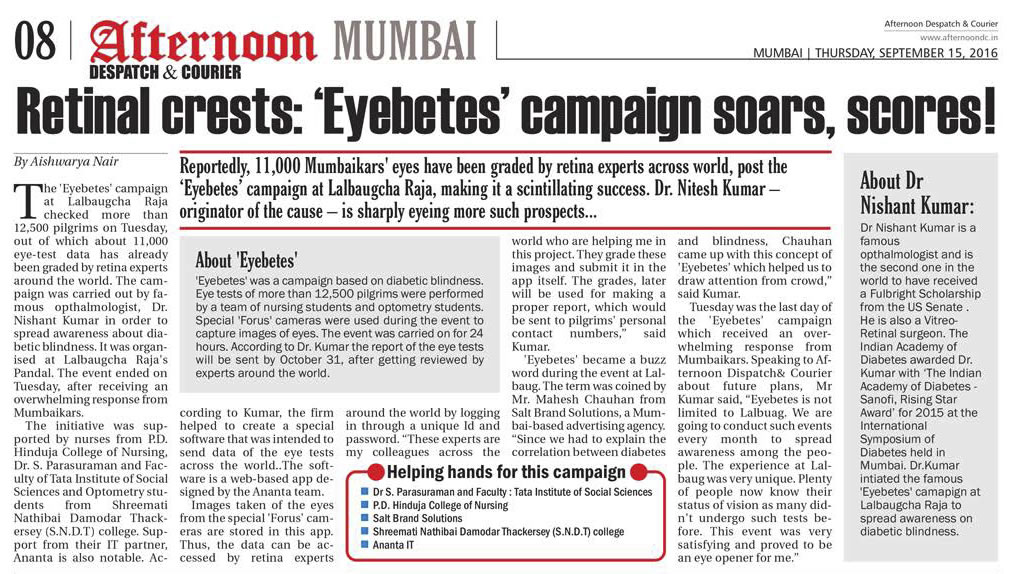 ‘Eyebetes’ became a buzz word during the event at Lalbaug. The term was coined by Mr. Mahesh Chauhan from Salt Brand Solutions, a Mumbai-based advertising agency. “Since we had to explain the correlation between diabetes and blindness, Chauhan came up with this concept of ‘Eyebetes’ which helped us to draw attention from crowd,” said Kumar.

Tuesday was the last day of the ‘Eyebetes’ campaign which received an overwhelming response from Mumbaikars. Speaking to Afternoon Despatch & Courier about future plans, Dr. Kumar said, “Eyebetes is not limited to Lalbuag. We are going to conduct such events every month to spread awareness among the people. The experience at Lalbaug was very unique. Plenty of people now know their status of vision as many didn’t undergo such tests before. This event was very satisfying and proved to be an eye opener for me.”

Helping hands for this campaign

About Dr Nishant Kumar:
Dr Nishant Kumar is a famous ophthalmologist and is the second one in the world to have received a Fulbright Scholarship from the US Senate . He is also a Vitreo-Retinal surgeon. The Indian Academy of Diabetes awarded Dr. Kumar with ‘The Indian Academy of Diabetes -Sanofi, Rising Star Award’ for 2015 at the International Symposium of Diabetes held in Mumbai. Dr. Kumar initiated the famous ‘Eyebetes’ campaign at Lalbaugcha Raja to spread awareness on diabetic blindness.