This Ganesh Chaturthi, doctors from all over the world will gather with celebrities and educational institutes to break a new Guinness World Record on September 11– the largest number of people screened for ‘eyebetes’ in a single location on a single day. Dr Nishant Kumar, who started the initiative, said that he wanted to highlight the relationship between diabetes and blindness in India and targeted the devotees of Lalbaugcha Raja for the ambitious project.

Screening and awareness programs will take place between September 2 and September 13 during the Ganpati Pooja festival and Dr Kumar said that he will be taking the help of the Lalbaug Raja Ganesh Mandal (organisers) to execute the world record. Kumar has also roped in actors such as Amitabh Bachchan, Salman Khan and cricket legend Sachin Tendulkar. 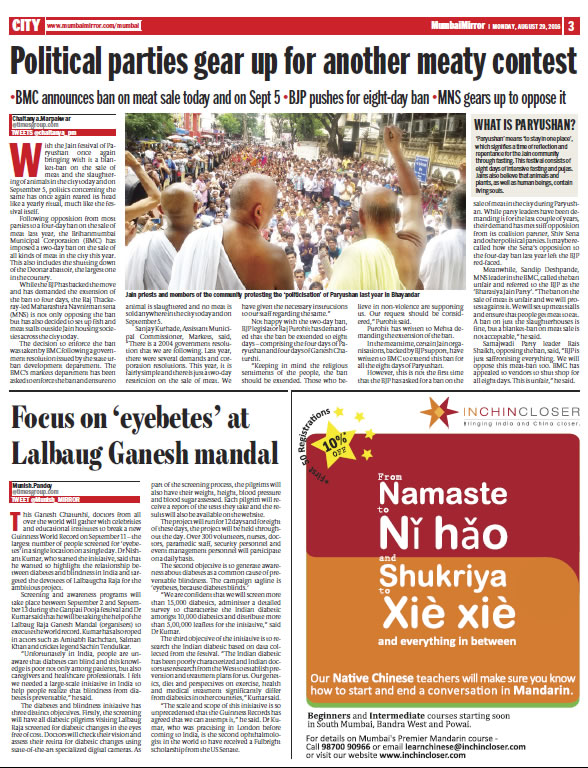 “Unfortunately in India, people are unaware that diabetes can blind and this knowledge is poor not only among patients, but also caregivers and healthcare professionals. I felt we needed a large-scale initiative in India to help people realize that blindness from diabetes is preventable,” he said.

The diabetes and blindness initiative has three distinct objectives. Firstly, the screening will have all diabetic pilgrims visiting Lalbaug Raja screened for diabetic changes in the eyes free of cost. Doctors will check their vision and assess their retina for diabetic changes using state-of-the-art specialized digital cameras. As part of the screening process, the pilgrims will also have their weight, height, blood pressure and blood sugar assessed. Each pilgrim will receive a report of the tests they take and the results will also be available on the website.

The project will run for 12 days and for eight of these days, the project will be held throughout the day. Over 300 volunteers, nurses, doctors, paramedic staff, security personnel and event management personnel will participate on a daily basis.

The second objective is to generate awareness about diabetes as a common cause of preventable blindness. The campaign tagline is ‘eyebetes, because diabetes blinds.’

“We are confident that we will screen more than 15,000 diabetics, administer a detailed survey to characterise the Indian diabetic amongst 10,000 diabetics and distribute more than 5,00,000 leaflets for the initiative,” said Dr Kumar.

The third objective of the initiative is to research the Indian diabetic based on data collected from the festival. “The Indian diabetic has been poorly characterized and Indian doctors use research from the West to establish prevention and treatment plans for us. Our genetics, diet and perspectives on exercise, health and medical treatment significantly differ from diabetics in other countries,” Kumar said.

“The scale and scope of this initiative is so unprecedented that the Guinness Records has agreed that we can attempt it,” he said. Dr Kumar, who was practising in London before coming to India, is the second ophthalmologist in the world to have received a Fulbright scholarship from the US Senate.